When the power supply for my old laptop died a few months ago, I didn't want to spend the $70 that Dell wanted for a new one so I bought a cheap $20 one off Amazon. This promptly broke after a couple of months of use. It stopped charging my laptop but the battery didn't discharge while it was plugged in, so I wasn't bothered that much since I mostly use the computer when it's plugged in anyway.

Now that I have a new laptop (a Clevo W740SU, for those who are interested), I thought I'd tear the two power supplies apart and see what makes the cheap one so much cheaper. 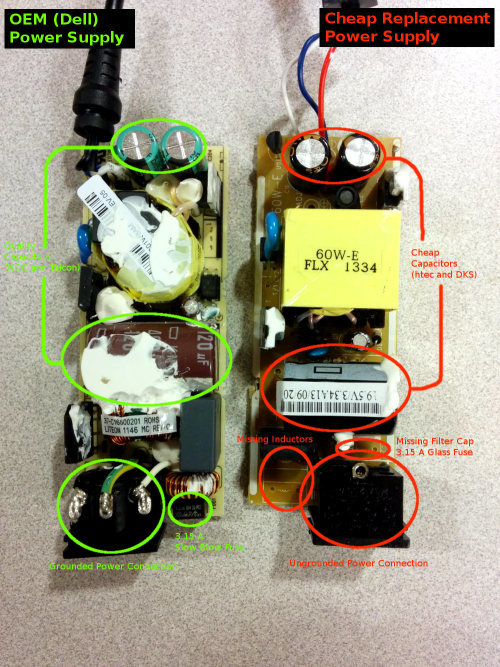 As you can see, the cheap replacement power supply I bought is not only missing several components, but the fact that it's not even grounded means it's also less safe to use than the OEM supply. My favorite thing about the cheap PSU is that it's not shielded at all while the Dell one is pretty tightly covered in grounded metal plates. I wish I'd known that before I took them apart so that I could have listened with my radio to see how much interference was generated, but you can imagine how bad it would be from this video about fake power supplies.

I guess the moral of the story is something that should have been obvious initially: cheap power supplies are usually junk. I certainly won't be buying another one and neither should you — the cheap ones don't work, are poorly made, and aren't all that safe, either.